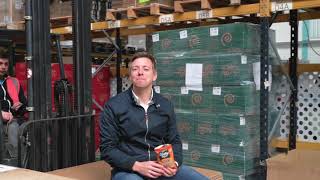 39 seconds of what we do

Hopefully you've saw us on BBC's Dragons Den on Sunday. What an experience that was. Despite it being TV, in real life the Den is exactly as you see it. No holes barred, the lift door opens and bang, there are the 5 Dragon's looking back. Focusing on the Dragons, I didn't even notice the cameras or the crew and just took a deep breath and started the pitch. I don't envy the Dragons, they have to sit though hours of pitching for weeks on end so no wonder they aren't always smiling. However Sarah gave the biggest grin and you could tell she just wanted us to do well so I ended up looking back at her every time I needed a bit if reassurance the pitch was going well.

It was great that one of my best mates was there with me. Not only as my business partner, to help with answers but also to experience it with me. Whats the point of doing something if you've got no one to talk to about it and understand how insane it was!

You saw the pitch, you know how it went, but something us as viewers don't get to see is what happened next.

We left the Den, high fived, called our Mums and then met Nick Jenkins to swap emails, further high five before packing up our stuff and driving back home to London from Manchester. On the way back we decided to swing by our old favourite pub Sacks of Potatoes, Aston, where some of our ideas came from.

A few weeks later we got to meet Nick again and I can honestly say he is one of the nicest blokes we've ever met. He knows his stuff, gets right to the detail and loves the brand. It took a few more weeks for his team to ensure all business is exactly as stated and we signed the deal in the Somers Town Pub, Euston. Nothing glamorous, just a few pints, a biro, a stack of paper and a man hug.

You'll see from the show that our business was already turning over £420k a year and since we filmed it we're on track to do £1m and we launched our own beer end of July. To say we are moving quickly is an understatement. We're excited to see what the publicity from the show and having Nick on board will do to accelerate the growth. But we're also realists. There have been 14 seasons on Dragons Den. Each one had about 50 businesses on it. That's 700 businesses that have appeared on the show. Just because we have been on the show does not mean we will be an overnight success. You can't polish a turd. Instead we are going to work harder than we ever have to bring our customers a product and brand you love.